All Better. For Now.

tldr: Rodney had a tummyache. He is back on ulcer meds. I am riding again. 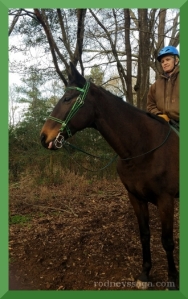 Back in the saddle. The tongue thing is new.

As I’ve said before [Rodney’s Feet], one of Rodney’s tells for pain is to act scared. He was doing this, but only in the barn. Out in the pasture, he was galloping about without a care in the world. Put a halter on him: Sky is falling! Sky is falling! I took this personally, leading to gloomy posts such as this [The December Dismals] and this [Looking Back 2017, Home Team].

We were increasing his feed yet having to tighten his girth. In hindsight, duh. But hindsight is like that.

I took him for a simple, in-hand walk around the field. He was awful. He was so awful that I gave up halfway back to the barn, removed his halter, and allowed him to run off. I could have wrestled him home, but to what end? I tweeted my medical advisor. He heard the frustration behind the tweet. The options for problems were muscular-skeletal or digestive. The former was clearly out, so perhaps his gut had gone funky again. Medical Advisor came home, got the leftover bottle of pills from the shelf, put them in my hand, and said, “One month.”

I thought we had put Rodney’s stomach issues behind us [Zeno’s Horse Training]. Wrong. Apparently, if one is a super-special snowflake who feels the world deeply, one can have flare ups.

After one dose, Rodney was noticeably better, i.e. happier. I retraced the walk that he had done so poorly. Success. After two walks, I sat on him again. We are now doing mini-micro dressage moves and ridden walks around the field within sight of the barn. I’m thrilled. It’s not much on a grand scale, but at least the vector is back to pointing in the correct direction.

Was it the new feed? Probably not. It’s been over a year [Feed Adventures] and Rodney was fine earlier in the year [We Leg Yield, Who Knew?]. For a long while, I blamed the massages [Massage Day, Dismals]. Sorry Molly. My current thinking is the sand colic pellets [Sand Colic?]. Since it had done great things for Milton [QR], we tried Rodney on a week’s worth. Perked him right up. So we repeated it the next month. Wrong. I hypothesize that the scouring action of cleaning out his gut was okay once, but too harsh on a regular basis. Rather like using strong toothpaste on my sensitive teeth. I have no idea if this theory has any bearing on Rodney’s digestive reality. Any equine physiologists out there?

So, we are back to grinding pills and dosing him with a syringe [Say Aaaah!, Rodney Update] We won’t keep him on ulcer meds. They are expensive if he doesn’t need them all the time, and, more importantly change his attitude [Zeno]. He’ll probably get a maintenance dose one week each month, as Milton does with the sand stuff. Do they need it? Who knows. For now we are not messing with success.

Why change one variable when you can contaminate the experiment by changing multiple variables at once?

We reinstituted naps to give Rodney alone time.

We added probiotics. Medical Advisor has been reading data that suggests probiotics are more than mere manure additives.

We acutely dose Rodney with an oral syringe of antacid – the white stuff not the pink stuff – before each ride.

We ordered new brushes. While Rodney is less fearful in the barn, he is still prone to sudden spooks. We think he might be unusually affected by static. Either he generates more shocks, or he is more sensitive to them, or both. His winter grooming kit now consists of a hoof pick and a cotton towel. I wear leather gloves. I thought a rubber curry comb was safe. Turns out electric insulator and generating static electricity are two different properties. We have ordered static-free brushes. More on these once they have been judged by the staticee. Super-duper-special snowflake.

Something in this avalanche of changes is working.

Right now Rodney is behaving better under saddle than in the barn, which is unusual for any of my horses.