Road to the World Cup: Have Saddle, Will Travel. Guest Post

Her most recent adventure has been to qualify for the World Cup Team. In the spirit of the old Road To Rolex posts, I’ve asked her to share her story. Step one: getting there. Reagan and her mom flew to Missouri last December for team try-outs at William Woods University. The horse were supplied by the organizers. Usually when you need a saddle, you also need a horse. How do you ship a saddle when you aren’t taking a trailer?

I am 28 years old and have been riding for virtually my entire life, but have never encountered the issue of how to fly with a saddle.  I’ve never had my luggage lost before so I figured I was due for it and this would be the weekend it happened. I had my suit, hat, boots, gloves, and everything for horse show hair in that bag. Everything else that might get lost could be purchased at a Missouri Walmart.

How I’m dragging it through the airport.

I have it wrapped around the handle of my rolly bag. 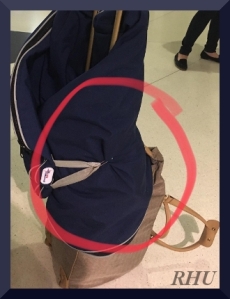 Safety pinned the handle to keep it wrapped up.

I am a person that plans EVERYTHING in advance and had to make sure I had all the minor details worked out prior to getting to the airport.  I decided that I most certainly will be carrying on my saddle (by far my most precious cargo), but what would TSA think of me trying to get the chunky, bulky piece of leather through security?

So I Googled “how to carry on a saddle”. There were multiple forums on the subject that were very helpful.  A few people had experienced issues with the stirrups.  TSA had believed they could be used as “weapons” and required they be checked.  I decided to roll the dice and believed I could get them past security.

Once I got to the airport, I checked my luggage and descended upon the dreaded TSA checkpoint.  I had my saddle in a bag with the flaps fastened to each other to make the saddle appear smaller and to make it easier to roll through the security scanner.  I sat the saddle down on the conveyor belt and nervously watched it roll away.  I don’t know if I was just paranoid and expecting the worse, but it felt like the security guy stared at it for a lifetime.

At this point, I just knew they were going to search my saddlebag and begin arguing why I couldn’t carry it on. Another moment goes by and out pops my saddle. No questions asked or even any odd looks towards my direction. I picked up my saddle (with stirrups attached), placed it on my roller bag, and off I went to my plane. 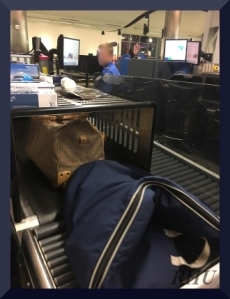 We made it through with zero problems.

Fun fact: A saddle might not give you weird looks at the airport, but a whip case sure will!
~~~
Update
Part 2 Road to the World Cup: First Team Practice