Update. Part 12 [Road to the World Cup, The Rest of the Show] 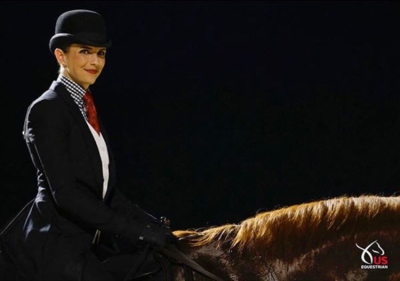 The 2018 World Cup Competition is officially over and Team USA won the gold medal for both the three-gaited and five-gaited teams. Yay!! Overall it was a unique experience but at the end of the day it was still me on a horse trying to whoop butt.

Early Monday morning, the countries gathered to draw horses. Each team would draw six horses. After the horses were drawn, the coaches decided which rider would ride which horse for our practice that day. I was assigned a horse named Photo for the Monday practice. Photo is not the prettiest horse but he is very well behaved and easy to get along with so I was happy with my practice on him. The practice for all six riders only lasts 20 minutes. The coaches would swap out riders that were not getting along with a specific horse or if they thought a rider would look better on another. I wasn’t swapped around at all. Photo was the only horse I practiced on and I was the only one to ride him so I felt pretty confident that was the horse I would be competing on for Wednesday.

Tuesday’s practice for the Thursday competition went about the same. I was assigned a horse named Kidd and I never swapped horses in practice. Kidd was the only horse I rode and I was the only one who rode Kidd so, again, I felt pretty confident that Kidd was going to be the horse I competed on for Thursday.

Wednesday morning, we had a team meeting where the coaches would speak to us individually and let us know what horses we would be riding and whether we would be competing during the rail work, pattern, or both. When the coaches sat me down they explained they felt that I was the best technician on the team so they wanted me to compete doing the pattern only since they expected me to get really good technical scores. They told me that I would be riding Photo during the pattern and another rider would be competing on Photo for the rail work. So I was chosen to be one of the riders that was “split.” After Monday’s practice, I felt that since I was the only one who practiced on Photo I would be the only one to compete on him. Being split took me by surprise.

Wednesday night’s performance did not go as planned. When the other rider finished the rail work on Photo, I was tossed on quickly to get ready for the pattern. I was given exactly 60 seconds of warm up. I was able to get one straightway of trot in before the paddock master yelled “times up!” I was frazzled to say the least. This whole “jump on and do a pattern” thing is not something I have ever done. I went in and did the pattern. I definitely wasn’t my best pattern but it could have been a lot worse. My scores were average so I was relieved I didn’t have the lowest scores. Photo and I did not click like we did during practice. On Monday, I rode him when he was fresh out of the stall and his mouth wasn’t tired. Jumping on him after he had just completed a class with another rider (beat tired and pouring sweat) really messed up our chemistry we had established on Monday. It was like riding a completely different horse. All excuses aside, I felt like I could have/should have done a better job.

We met again with the coaches Thursday morning to discuss what horses we would be competing on that evening. The coaches decided to split me again, but I was going to doing rail work this time. This did not surprise me since my pattern the night before wasn’t the most impressive. What did surprise me was they told me I would be competing on Noah, a three year old. I was not expecting to be competing on horse I never had the opportunity to ride at practice. For the rail work, we got 5 minutes of warm up and I got a feel for him quickly. Noah and I got along perfectly and I feel like we dominated our class. It felt redeeming to have a great ride!

(She totally rocked the class – KTW) 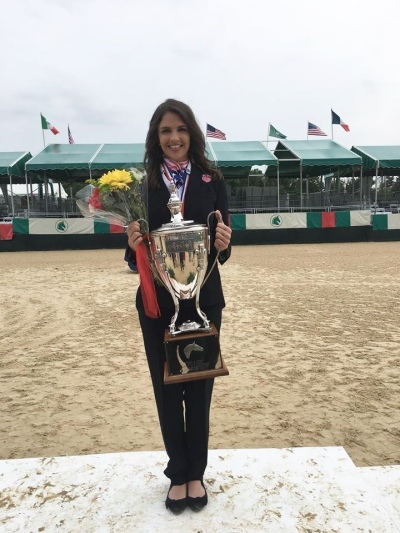