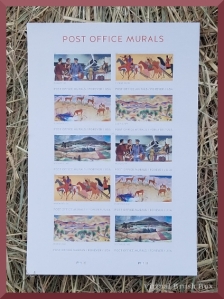 Process Notes
Despite an enthusiastic start [Year of the Stamp], stamps ended up in the ‘Interesting, but …’ bin. I posted four times last year and then wandered off to do other things [Stamp Archives]. My opinion at the end of last year was, “I will engage with these if an opportunity lands in my lap, but I won’t go searching.” [Dabbling in the Art World, Graphics 2018] A quick photo post of this year’s stamps counts landing in my lap.

Update
ABC& News: Anadarko mural to be commemorated with stamp, with video

“Mopope was also chosen because he was considered by Jacobson to be the best and most outgoing artist of the “Kiowa Five,” a trait which necessary to becoming the lead for the project. His cultural ties to Anadarko, home to the Kiowa, would provide an accurate depiction of the culture from his personal experiences.” Stamp mural is one of 16 panels. The Living New Deal: Post Office Mural – Anadarko OK