I intended to go.
State of the Blog: Y’all Connect

Pffft. Not at the Y'all @YallConnect conference. Rodney decided to have a moment this am. Actually, two at once. He's fine. Keeping eye on.

Dear Twitterverse, ISO horse blogs that start with the letter A or N for an alphabet post. Thanx.

Taking ideas for next year, particularly q, x, z & the like.

Went swimming after too much time away. Can't say I missed it. If not motivated by horse shows, I would be SUCH a couch potato. #fitnesswoes

Join a blog hop about your best class at a horse show: http://t.co/IOUbFAcxHf #equestrianhour #MyBestClass

… and now I must leave. Thunder is rumbling. Do you turn off your system for storms? #equestrianhour

Okay, I'm back. Trying to follow on phone instead of across several screens on desktop. #newbieblues #equestrianhour

Saddle seat does not do lateral work. It's kinda weird. https://t.co/sbwEQrwId8

Response to this question:

My tablet can't contact the mothership, otherwise I would. And probably get confused. https://t.co/bjvVdVnTll

Why do I see tweets on my notifications but not in my Twitter feed? #newbieblues #equestrianhour

Thank you #equestrianhour. You have given me ideas …

Back on my desktop. Tweets located. All is right with the world. https://t.co/5eaXy52zwq

USDF shirt with saddle seat jods. I am vast.

The picture that was supposed to accompany: 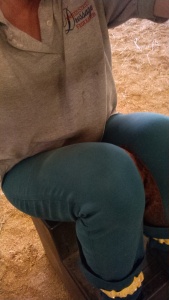 Racing supplies include butt plugs for horses. Who knew? Can't supply the link w/o including the visual. Sold by Big Dee's.