In which we declare … victory?

Milton did so well with the walk-alongs [Milton Gets Shafted] that we decided to hitch him to the practice cart. Yes, we could have done more successive approximations, but the time felt right. As with backing a horse, you can lean on the horse all you want. At some point, you have to put your leg over and see what happens.

Then, the cows next door stampeded. They live there. Rodney and Milton see these cows all. the. time. In Milton’s defense, they were thundering and mooing and crowding the trees next to our pasture. The noise was epic.

Milton had a spinning hissy fit. Horse everywhere. Cart everywhere. Greg retained control of the front end. During a lull in the action, I was able to distract Milton by rattling a peppermint. I then shoveled peppermints as on conveyor belt. This localized Milton long enough for me to unhitch. Greg walked around until pulses stopped red-lining.

We are almost (almost!) completely convinced that the problem was the cows, not the cart. Usually the cows are at the far end of their pasture. When they are close, or when anything else needs investigating, Rodney takes point and Milton bravely guards from the rear. With his bodyguard chilling in the barn after work, Milton was not pleased to be left alone with feral, rampaging cows. 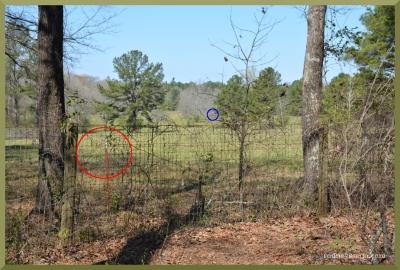 Cow Pastorale. The cows usually hang out far way (blue circle). On this day, they started up next to the fence (red circle) and ran to the right along the fenceline. The bare spot is Rodney’s observation post.

On one hand, Milton was not bothered by the practice cart, even when it was slinging around behind him. On the other hand, it’s hard to be happy with a schooling session that ends in hysteria.