Saddle [New to Me] is in the shop. This was not planned, but not unexpected. Extensive explanation follows. Short version: it’s all good. Get saddle back on Friday.

Structural Flaw
Saddle seat saddles have adjustable stirrup bars. Not sure why. The stirrup leather hangs off a widget that lifts up, slides, and locks into your choice of four locations. IMHO, whenever you introduce an adjustment capability, you introduce a weakness. This has been my argument with adjustable gullets, even though I own one [Saddle].

At some point, something vital inside the widget gives up and the widget no longer locks into place. It is free to slide up and down the length of the bar. Non-locking stirrups are relatively common on the used market. As far as I can tell, the repair is simple. Slide off the widget. Slide on a new one. However, getting to the bar requires disassembling the saddle. The cost of the repair can be factored into the price.

Or, one can decide where to put the stirrup and lock it in place with a series of zip ties. This was the case on the saddle I had been using. I did this thing. Well, I did – almost – this thing. It worked. For a while.

Mystery Solved?
The results of the most recent show were a bit odd [Report]. First day, four wins. Yay! The second day; new show. Same place, new judge, all-age classes. In my first class, I was third and the highest-placed adult. Good deal.

In the line-up, the judge said to me, “Great job. That was fun to watch.” Well, alright then.

During the break, Coach indicated that I was unlikely to beat the munchkin who won, but we could try. Back in we went.

Do you know how great it feels to be trotting into a class knowing that you have the good opinion of the judge?

I got zip. Nada. No ribbon. Deep breath, smile, sportmanship, yadda, yadda, yadda. Next class, sixth out of eight. Clearly, the universe did not want me to get a big head over the day before.

Somewhere in there, I felt a saddle rub starting on my left knee. Weird. I don’t usually get those. I dug my knee in, figuring I would deal with it when I was done. Afterward, I had an inch-and-a-half long abrasion on the inside of my leg. If you are interested in the gory details, I put a photo after the jump [here].

Did it occur to me that I was in a new saddle? Of course not. The day before, I had mounted with my tiedowns already in place under my boots. The torque tore the knee patch away from the left leg of the jods. I figured that was the culprit.

I came home. I pondered the disparity of my results. I wondered WTF and blamed myself [Addendum]. I unpacked the car. My handyman had an idea about fixing the stirrup. I lifted the skirt (the little leather flap that covers the stirrup bar). 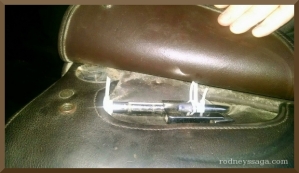 The zip ties had gone walk-about. The stirrup-holder widget was free to slide back & forth. Coincidently, just about the length of my knee rub.

The stirrup was ok when I cleaned the saddle on Saturday night. If they busted between the first and second class on Sunday, that would explain why I fell off the judge’s card.

I never felt a thing – other than the rub. My leg did not swing about. Coach Courtney would have noticed. However, the effort of avoiding leg wobble may have caused my crispness to wilt.

Aside, for those of you who know these saddles, we put a small zip tie in the relevant groove instead of lining the entire bar. The pressure caused the tie to pop out & go sliding down the bar. It was imbeded so deeply in the front of the saddle that I had trouble cutting it out. End aside.

Off to the Shop
Yes, I could have gone back to the previous repair. No reason it shouldn’t work as well on this saddle as it did on the other. OTOH, I am now twitchy about jury-rigged solutions.

Even with the repair costs and the inconvenience of detouring to Winner’s Circle in Shelbyville, TN, saddle was still a bargain.