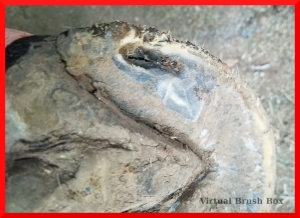 Verdict
So much for our theory on Milton getting kicked [An Alternate Explanation]. Turns out it was a classic abscess. He picked up something that gradually worked its way up and out. Farrier says better to have them in the heel than the toe. Not as far to go. Also says that lameness from an abscess depends on several factors, including how close it is to any nerves.

Props to Milton. In retrospect, he was fairly stoic. Even when he was outright lame, he would walk out of it in a few steps. Given the visuals from bottom to top, he could have reacted a whole lot worse.


Appointment
Farrier team still willing to come out. Yay. Really glad I don’t have to explain to two, thin-footed Thoroughbreds that they are now barefoot horses, deal with it.

Turns out, it’s pretty easy to stay 6 feet from your farrier. Left payment on a stool in aisle. Put first horse in impromptu cross ties. Retreated to other end of barn. Assistant held horse. Switch. Repeat. Waited for them to gather equipment. Collected second horse.

Wasn’t terribly disruptive. There was one moment when I would normally have stepped up to hold Milton while the assistant was busy. Otherwise, the new protocol didn’t seem to slow the process down at all. Note, farrier prefers horses held rather than crosstied. I usually hold Rodney. Assistant holds Milton. He behaves better for them.

Except for handing over payment to assistant and while farrier is working on front feet, addressed above, we probably haven’t been within ten feet of each other in years.

3 thoughts on “Shoeing at a Social Distance”