We Cantered! We Won! Guess Which One I Care About! Show Report, Full Circle Horse Park, May 2019, Dressage 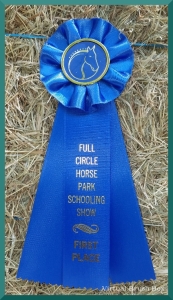 Question of the day.
Could we canter on command?
Yes, we could!

Best part of Day
Without doubt the best part was getting both canters, on the correct leads, in time to finish the movement. The transitions themselves were labored and it took me until the centerline (halfway through the circle) to sit up, reorganize, and ride a decent gait. That’s all stuff we need to work on. For now, we went in the ring & execute the maneuvers. Yay!!

Apparently, I also talked to him. A lot. Didn’t even realize it. The judge seemed to understand that these things happen at Intro level.

Other Best Part of Day
Milton had an outstanding attitude all day. When we arrived, he gave a deep sign – while still on the trailer. Grazing. Lunging. Tacking. Riding. The edge was gone. He was remarkably unremarkable.

Exception One: What the cool kids do.
As I attempted to detangle his tail, Milton fidgeted. This was unusual. He usually likes people to fuss with his mane and tail. He’d move left. He’d move right. Not spooking. Not excitable. Just bratty. Well, I know how to fix that. On went the nose chain.

Milton sobered up immediately. Not with a contrite ‘Oooh I was bad, I’d better behave now.’ Not at all. Instead, he relaxed and start chewing. His minions had gotten the message. He wanted a chain, thank you very much.

We decided that Milton had been talking with the Saddlebreds. At shows, Stepping Stone Farm uses fancy leather halters and leather lead shanks with chains. Often for good reason [In Chains]. So that’s what Milton wanted. He wanted to do what his Saddlebros do.

At horse shows, all the cool kids wear chains.

Except Two: Hello Mr Hyde.
Our friend S was making her canter debut. She also got both leads and won her class. Go Us! The schedule was such that I had to watch from aboard.

I dunno what weather you have, but we went from winter to summer. Do not pass Spring. Do not collect balmy, breezy days. By 11 am, it was outright hot. To give Milton shade, we loaded him on the trailer, put up the body barrier, and left the doors open. He had a hay net, water, shade and as much breeze as was available. This was a mistake.

Time to get on. Remove horse from trailer. Tack up. What have we here? Pissy. Pissy. Pissy. Suddenly, I was riding the horse I had in March. Hops were not imminent but neither were they off the table. Tried walking. Didn’t help. Tried quiet trotting. Didn’t help. Eventually gave up & stood to watch the test. This gave him gave time to chill/reset his brain. When we got back in motion to walk over to the jumping field, Mr. Hyde had left the building and Dr. Jekyll was back.

Did he think he should have gone home because he got on the trailer? Did we violate debarkation protocol by tacking him up as soon as we took him off? Did we forget to say Mother, may I? Who knows. In way, it was interesting. It meant that mood in the morning was a choice on his part.

It wasn’t being worked/ridden a second time. He does that all the time in schooling and at shows.

Highlights of Test
On the trot around the ring beforehand, we had a smoking trot on contact. Well, for us anyway. Went away in the ring. So hard to stay loose AND steer. At least we know it’s in there.

At the end of the test, I tried to hot dog with a show trot down the long side. Milton hadn’t settled from the canter. The same thing happen in in rehearsal [Demo]. I should have remembered.

The last two are highlights rather than errors because they meant we were having a conversation. Milton did not put his hooves over his ears and endure until he could escape the sandbox.

Truth In A Clerical Error
I can honestly say that I am more pleased with how Milton went than about how we placed in the class. When I went to get my ribbons, they handed me fourth. I spent the weekend thinking I was last in my class. I didn’t see the correct results until Monday morning.

On Sunday I made notes for the blog. The original title of this post was, ‘We Cantered! We Were Last! Guess Which One I Care About!’

At the show, the results board posted the Junior section of Class 5, but not the Adults. I never saw a score sheet. The secretary was looking at what I suspect was an alphabetical listing of the class, particularly since there should have been two entries not four, due to the scratches.

Although it means I missed out on a blue ribbon and a gift certificate, I’m glad to know that the 7s were because we did a decent job not because the judge was feeling generous to everyone in the class. Note for the future. Never believe a result until you see the whites of its eyes. This is not the first time [Important Questions: What Would You Do?]. 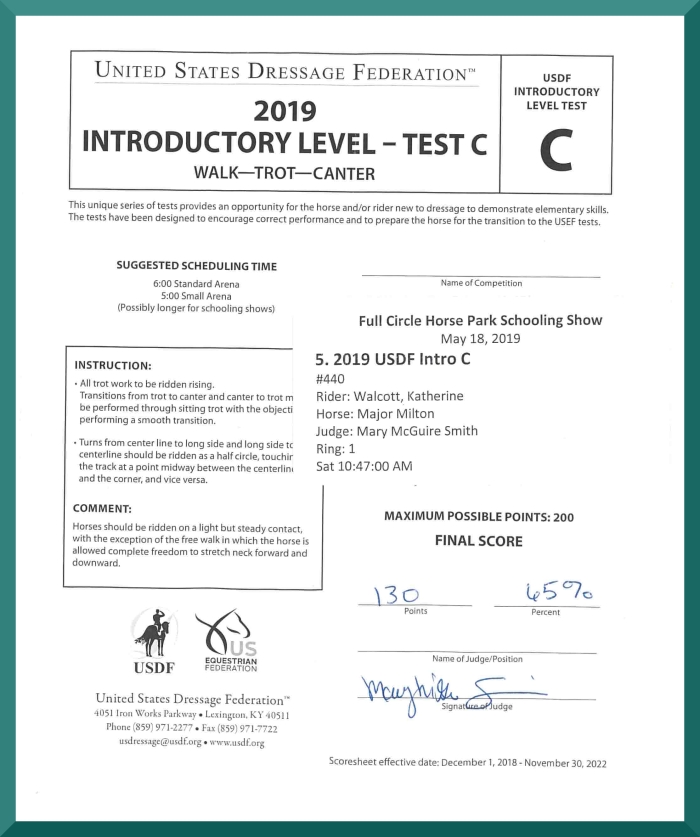