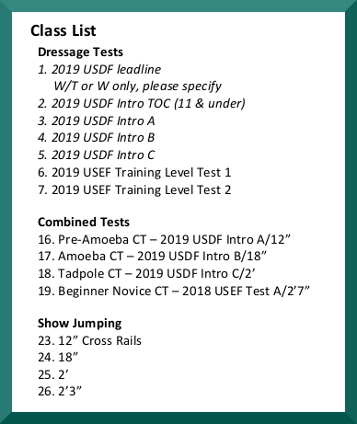 I wonder if other people spend as much time cogitating about which classes to enter as I do.

We’d learned what there was to learn at Intro A&B [Preliminaries Accomplished]. Yes, we still had a huge amount of work to do on improving our dressage. As far as test-qua-test was concerned, enough of that.

When I signed up, I felt there was a 50/50 chance we’d get the canter(s) before we ran out of circle(s). After practicing our test several times [Demo], I raised the chance to 75%.

Initially, I considered signing up for Training Level Test 1, a test I have done an infinitude of times over the years. Yes, Intro C was easier, but I might as well get started learning latest version of T1.

Then, I read SHSP’s post about her dressage test,

Thank goodness Intro C and I go way back. Even with the new 2019 tests, I can do Intro C in my sleep! Show Horse, Sport Horse: Sidetrack–Meet Lacy

That’s how I used to feel about Training Level Test 1.

I realized if I do starter levels, I will be doing Intro tests. Might as well practice. Then, if (when!) I move up, we do the USEF eventing tests. These are new. Back in the day, eventers simply borrowed the equivalent straight-dressage test. No more. If I ever do a Training Level test, it will be because I choose do dressage.

Intro C it is.

Class 23- 12″ Crossrails
I admit, I felt silly entering a 12″ class. I had to check the results from the previous show [Report] to confirm that we had done 12″ rather than 18″. Fish aren’t the only thing that get bigger in memory.

We hadn’t jumped at all in between the two shows. We’ve been working on fitness, on cantering at home on the lunge line, on group lessons, but no jumping.

Plus, the goal is positive experiences for horse and rider. At this point in our progress, it is better to undershoot and have a better chance for success.

At least it was a ribbon for a clear round. No beating up on children and ponies. Or vice versa.

Choices Made Easy
Since I was moving up in dressage but not over jumps, I had to enter separate classes. There was not a combined test option. One less thing about which to perseverate [Names Matter].