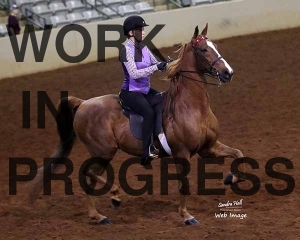 I’m not fishing for pats on the back. I’ve had some great times and some great rides. As for truly grokking the sport? Mostly I’ve learned what I don’t know. While I have street cred for my skills at the introductory level, I don’t grasp the first thing about piloting a horse on the green shavings [Why Green?].

Jumper Analogy. I have been jumping crossrails on school horses. I have been to Crossrails Nationals. I haven’t a clue how to ride a 1.2 meter class (or 3′ 11″, the lowest level for Amateur-Owner Jumpers).

I’ve been introduced to the show bridle, the saddle seat term for a double bridle [Different Versions of the Same Thing]. While I have ridden and shown with it, I am still in the Do No Harm phase. I don’t actually know how to use the the daft thing to influence the horse.

Pleasure Driving. I am only just starting to be more than a happy passenger.

Jumping Analogy. Grab mane. Hang on. Versus. Follow over the fence with a sympathetic hand. Turn in the air. Land in position to adjust for the next fence.

A handful of nice horses have carted me around at a rack [Let ‘Em Rack]. And, of course, those times the horse racked when we weren’t supposed to [Trump-the-Horse, Robert]. Getting & keeping it on command, under pressure? Not a prayer.

I bring this on myself. My lack of familiarity with fancy saddle seating starts with my stubborn refusal to move up to performance classes. [Suiting Up]