Continuing to repost the entries from my previous monthly blogs Back To Eventing and Back To Riding. 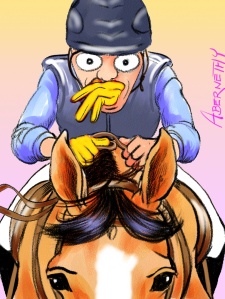 You gotta respect an instructor who can start a sentence with, “When I was teaching [Olympic Silver Medalist] Kim Severson……” At the end of October, I spent two days at Foxwood Farm auditing a clinic by Jimmy Wofford.

Wofford’s Words of Wisdom
(As interpreted by me. Mr. Wofford should be held harmless from however I chose to butcher his ideas.)

Horse and rider need to jump the same jump at the same time.

It’s not against the law to be green.

When reapproaching a jump after a problem, don’t ride faster, ride stronger.

To steer around a stadium course, point your chin at the jump.

The difference between bad riding and good riding? I can‘t see good riding.

The horse hears the aids he wants to hear. Quick horses ignore your hand and overreact to a touch of leg. Sedate souls, vice versa. Therefore, you may have to unbalance your aids to balance your horse.

Punish immediately and reward immediately. Make a fuss over him. Pat him a lot. Tell him he’s wonderful. He’ll start to believe you.

The brief guide to jumping: Canter in a rhythm. If they jump, you kiss ‘em. If they don’t, you kick ‘em.

Clinic Theory
I believe in undershooting when entering a clinic. If I rode at X level, I’d sign up for the X-minus-one group. I’d want to be at a level where I was rock-bottom certain. That way, when the clinician told me to jump a funky gymnastic line at least I wouldn’t be worried about the height of the fences. This weekend, for example, one young lady kept sticking her tongue out when jumping. Wofford warned her and then made her jump with her glove stuffed in her mouth.

Moi
How was life over in my little angst-ridden corner of the universe? I first proposed this clinic back in March (blog posted in June). So I’ve had half a year to adjust to the idea that I wasn’t riding in it. Come the day, I knew I wouldn’t enjoy watching without riding but if I stayed home, I’d sulk. Mostly, at least publicly, I did okay. However, each of the clinic days I did disappear for a quick snivel. Both occasions were after lunch, so blood sugar may have been involved. I subdued my disgruntlement by taking notes as if the clinic were an event to be covered. Occasionally I was pulled out of writer mode by an attendee’s horse misbehaving. At that point, I’d have an anxiety attack in sympathy by imagining the Technicolor fits Rodney would have thrown. That’s the point. I did NOT ride because I was NOT ready. If I ever DO ride in this or any other clinic, it will be when I AM ready. But try telling that to my stomach.

In keeping with my promise of looking on the bright side:
1) I was way more relaxed than had I been riding. Annoyed, frustrated, and depressed, yes. But more relaxed.
2) I was spared the sight of my oversized giraffe in the Beginner Novice group with the pony brigade.
—–
(Admin notes removed. KTW)
~~~
Rodney’s Saga repost locations

Back To Eventing
BTE 1 of 9: How I Won the Training Level AEC
BTE 2 of 9: The Cast Assembles
BTE 3 of 9: The AEC, a Realization in Five Phases
BTE 4 of 9: New Horse Blues
BTE 5 of 9: Buying the Horse is Only the Beginning
BTE 6 of 9: Back To Square One
BTE 7 of 9: Getting to Know You
BTE 8 of 9: Spring Fitness
BTE 9 of 9: Forward Planning
Or
List of all nine direct USEA links