Continuing to repost the entries from my previous monthly blogs Back To Eventing and Back To Riding. This was originally posted on the USEA website 2011-01-18, archived here.

Future me: This when the rot set in. In truth, the rot set in gradually. This is where I acknowledge it. Up side: this is the beginning of Jean Abernethy’s brilliant illustrations. The one below appeared with the original post, but got lost on the way to the archives.

Back To Eventing: Back to Square One
(The author despairs that she will ever return to Eventing.) 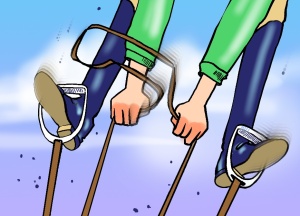 Our mad dash to victory has taken a detour. When New Horse arrived, I knew there would be issues. He is big-strided and responsive. I had spent the last handful of years puttering about on a retiree. I did not imagine that we would saddle up and start showing. I did expect that by now we would be having regular dressage and jumping lessons and be shipping to cross-country courses for schooling. Instead, we are lunging and doing hillwork in hand. The reason we are so far behind the curve arrived in a bag of feed.

New Horse was on a feed not available where we are. What to switch to? Other Horse (future me: OH=Mathilda) is low-maintenance yard art who eats a handful of whatever is on offer. Previous Horse ate super-digestible feeds since he inhaled his food to the extent that bits of it passed through whole. New Horse was neither old nor a vacuum, so hubby and I settled on a new feed for sport horses. I’m sure it’s a marvelous feed, if one is conditioning a horse to go Intermediate. For an A.D.D. Thoroughbred, even a handful was too much.

In retrospect, the problem is obvious. At the time, all was fog and frustration. The horse had shown a bit of temper during try-out. Was it this tendency writ large? Was he more horse than I could handle? He has scarring on his back from an injury as a foal. Was this tightening up?

He grew less and less manageable. Sometimes he would spook and then have a come-apart. Sometimes, he’d have one for no reason at all. As long as it was simply an enormous crow-hop in a straight line, I could rally the nerve to kick him forward. When he added the buck and the spin, I had to grab mane, wrestle him to a stop, and hyperventilate for a while. In addition, the fits developed an unhinged quality that shook me a little more each time.

He finally dumped me. As soon as hubby was around to watch and dial 911, I got back on. We had a pleasant, relaxed walk halfway around the ring, whereupon he tripped over an invisible wrinkle in the ground and had a complete cow about it. We walked gingerly back to the mounting block, whereupon I called it quits.

Of course we considered what he was eating. We cut him back to the point that he began to lose weight. Yet he continued to misbehave, even in hand. When we finally blamed the feed itself, we switched him over to the equine equivalent of rice cakes as fast as good horsemanship would allow.

After detox, he is much, much better. Unfortunately, the psychic damage is done. If the poor horse twitches an ear, I assume he’s about to levitate. To rebuild, we are back at Horse 101. He is on lunge-line probation until he walks, trots, and canters to my satisfaction. The hillwork gives us time to get acquainted and to get in shape together.

In celebration of our new beginning, New Horse has been renamed Rodney in honor of jumper rider Rodney Jenkins. Watching Mr. Jenkins and his marvelous horse Idle Dice at Madison Square Garden was a highlight of my Manhattan childhood. Rodney-the-horse will show under the name Perpetual Motion, which is his nature even on a low-excitement feed.

Future me, again: The name Perpetual Motion was never sanctified on a Coggin’s. It did not survive the introduction of his ulcer medication, “Once we finally sorted out his meds, he calmed down – for a relative, Thoroughbred definition of calm – so PM was out.” [Help Me Name My Horse]

This is why the minor reversal with Milton has hit me so hard, It’s deja vu all over again.
~~~
Rodney’s Saga repost locations
BTE 1 of 9: How I Won the Training Level AEC
BTE 2 of 9: The Cast Assembles
BTE 3 of 9: The AEC, a Realization in Five Phases
BTE 4 of 9: New Horse Blues
BTE 5 of 9: Buying the Horse is Only the Beginning