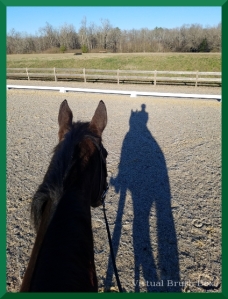 Chilling in the arena. Rodney has learned to stand in center ring at SSF. He’s gotten good at watching other horses work. Now he’s learning he can do the same in the sandbox. Who knew?

Because of course he is.

Partly due to the enormous expectations I put on him from day one. Will this be the horse who takes me amazing places? Now I add, will we ever amount to anything? Will it all some day be worth it? So, no pressure.

Partly due to time spent trailering. Right now, riding means loading up and going to Full Circle Horse Park for lessons, more on this below, or to Stepping Stone Farm, for practice, ditto. Our footing is awful and Rodney isn’t focusing at home because he is fascinated by the cows next door.

Even if I were the ultimate Zen rider with Olympic facilities – and no cows – on my doorstep, Rodney would still be the most emotional, anxiety-ridden, complicated, hot mess of a horse in my experience. (Yes, yes, horse-rider similarities have been pointed out to me. I’ve suggested he write a blog post on the subject. End of digression one.) (Milton is a close second within horses I have know. How we ended up with two such fragile flowers is a frequent topic of discussion around here. End digression two.)

Because, mostly, the key to Rodney, at the moment, appears to be saddle time. Lots of long, slow saddle time.

All of this effort and exhaustion is paying off. We are making actual, legit progress in Rodney management. It arrive thusly.

We used the holiday break to ship horses hither and yon, as we do [Weekend Voyages].

Lesson 1, attempt 1. Fail. I forgot my bridle. ??!?!?! I do not forget things. I’m the one who always has everything. Extra halter? Spare show clothes? A string to tie up your sign? Ask the Pony Clubber. I checked everything. My boots. My hat. Rodney’s multiple saddle pads. I filled the treats bucket. I remembered the battery for his warming blanket. And yet I forget the blankity-blank bridle?!?!?

Lesson 1, attempt 2, two days later [Red and Green and Riding]. Success. Kinda. Lesson occurred; it was terrible. No relaxation on the horizon. At one point Coach Brian [1, 2] asked me to trot. I shook my head. Not happening. When we did trot, it was for short spurts. I didn’t avoid the issue. I made Rodney work, but at a walk. I deflected instead of confronted. I didn’t have it in me put my leg on and say trot d*mm*t.

Side note. The way I can tell Rodney is relaxed is that he will stand. If he pops out of gear, he is still anxious. So Coach Brian had me make tiny circles every time Rodney moved off without being asked. Don’t want to stand? Then make circles. Eventually Rodney stood. Although it worked, I don’t like the exercise. I could tell Rodney was standing because he didn’t want to do any more circles, not because he was relaxed.

I finally did something I have never done. I had someone else ride. I asked Coach Brian to get on. It wasn’t a miracle cure, but at least someone was willing to push him forward.

For lesson #2, attempt 1, five days later. Fail. Success. We changed everything. One. I took out the folded saddle blanket [Recent Changes], deciding that Rodney would prefer a more stable saddle over more padding [Not As Good]. Two. We decided he was old enough that “senior” might be a good word to add to his diet. Watching him from the ground, I thought he looked skinny. We think he may be spending so much time watching cow TV that he’s not getting his daily allotment of grazing. Really, he’s that obsessed. Three. We made sure to dose him with UlcerGard before. Four. We changed the warm-up plan.

We know Rodney needs to walk to get his body loose and his head in the game. To insure that he got as much time as he needed, we would warm up in another ring, away from the lessons. When he was ready, we would go over. If that mean we had a 30-minute lesson, so be it.

Five, out of our control but to our advantage. The day was warmer, which helps immensely when your horse is part lizard [Therapy].

Actually the lesson never happened. But the warm up plan worked great. We walked for 40 minutes, both in the dressage warm-up area and in the covered arena at FCHP. After, we did a few moderately decent trot circles in both directions. Huge improvement from five days earlier.

Lesson #2, attempt 2, one week later. Fail. I bailed. Not enough riding in between. That fine line between having lessons to improve and improving between lessons.

Lesson #2, attempt 3. Scheduled for next Saturday. We shall see,

In between lessons and lesson attempts, we took Rodney over to SSF. We walked. We walked in the covered. We walked in the ring. We walked around and around … and around the circular driveway. We walked through the barn. (This is an ASB thing. They use the aisle for straight-line practice. Took me years to be okay with riding into the barn. I was always taught that was verboten. End digression three.) After, we would do trot sets in the small, contained, covered arena with me using as little rein as possible consistent with maintain the trot and staying marginally straight.

We also took a trip back to FCHP to acclimate for lessons and for – maybe? possibly? – the 2020 show season. We walked the ring road, with Rodney choosing to curl sideways as if he intended to leg yield the length of it. He used to do this at home on our pasture walks. In the covered, he did some nice trotting, including going the length of the long side several times and doing big trots across the diagonal. Finally, we went over to the dressage ring to walk and stand and learn that the sandbox is not always a place of effort and crisis, see photo.

I’ve gone on long enough. That was Rodney’s holiday. How was yours?

Props to my groom, groundperson, & chauffeur, who finds this an acceptable way to spend his free time.