100. Academy Driving — Any Age Driver, 2nd of 4
With Joe Somebody. Thank you to Emily Hillhouse.

I was so worried before the driving class. I obsessed over one bad moment from our introductory lesson [Will I Ever Learn? ] when I wanted Joe to go one way and he kept going the other and we were getting closer to the rail and eventhough were many feet away at a walk and nothing really went wrong, I kept imagining what could go wrong and I’d pull harder and Joe would resist more and what if I did this in the ring and what if it all went pear-shaped and … My brain would not let go.

I thought about not doing the class. I thought about being home instead of at a horse show. That many be a first. I thought about how Coach Courtney would not have asked me to do this class with this horse if she did not have faith in my ability. She has never steered me wrong. To which a small, treacherous voice would add – yet.

Finally Coach Courtney said me that if I didn’t like how the drive was going I could always stop. Oh. Okay. All I have to do is get in the cart and try. I can do that. Yes, we are each in control of our own destiny. I had the power to said no at any moment. I was under no pressure other than my own. Still, it’s nice to be given explicit permission.

It was also a reminder to take it one step at a time. Could I get in the cart and warm-up? Yes. Concentrate on that. Years ago, the student of a friend of mine was about to go in a jumper class that she did not like the looks of. I asked her if she could do the first fence. She said yes. The second? Yes. And so on. She went in. She got around. It was like that.

As we hitched, Assistant Coach/horse owner Emily asked if I wanted her to take Joe for a spin first. Yes, please. He was perfectly civilized. She brought the cart over. I got in, mostly by reflex.

I manage to make my hands behave. I reminded myself that the rein aids in saddle seat are much lighter than in hunter/jumper/eventing/dressage. I kept telling myself to keep a hold but make it very, very light. Joe seemed to approve.

I’m proud of how I drove. I kept a constant, light, soft, moving, sympathetic contact. Most of the time. I grabbed him once. He dove to the side. I stopped grabbing. He stopped diving. Joe is very dramatic with his feelings. Fortunately he is equally quick to forgive and move on. By the second direction, I was able to relax and enjoy myself. A least a bit.

We took second to an adorable fluffball. No beating that.

Photo Lesson
Captured in photo format, the results of my tendency to let go of the horse.

We have just been asked for an extended trot. I fling the reins at Joe. Note the droop in the reins. Joe wants to know what in the name of horse training I am going on about. Note the ears back on the horse. 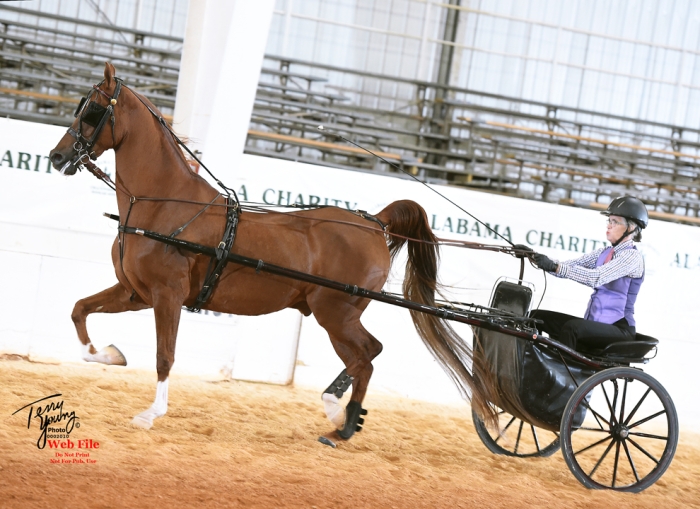 For the side of the ring, Miss Emily reminds me not to drop the reins. I regather myself. Note the straighter line of the reins. Joe is much happier now that I have show some signs of knowing how to drive. Note the ears forward.

Hold to go faster. This is so counter-intuitive.