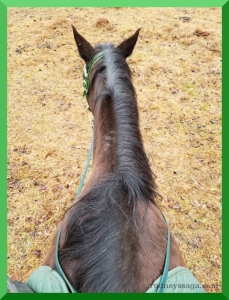 With all this talk of logistics [Milton’s Schedule, Saddle Seat, Driving], do I have a plan for Rodney? Yes, the same one I’ve had for years. Keep plodding forward and hope for a miracle [Sidney Harris]. I’ve identified two mini-miracles that might almost count as steps. Not goals. I don’t do goals [Not].

1) Restart trailer acclimation sessions. Go slow. See if one day we can get him shipping locally either to the enclosed spaces of Stepping Stone Farm or to restart dressage lessons [Leg Yield]. The last time we tried standing Rodney on the trailer, he panicked so hard that he injured himself despite having his lower legs covered with wraps the thickness of mattress padding [Dubious Future].

2) Find an instructor who can come to the farm. I’d still have the footing and facility issues but at least we would be creeping forward.

What about shows? Pfffft. If eventing is not on Milton’s horizon, shows are not even on Rodney’s planet. If this doesn’t sound as positive and uplifting as last week’s plans for Milton, there is a reason for that. Stay tuned.
~~~
Above photo: inspiration for including part of the tack in an earpic came from Modern Equestrian on Instagram, View from the top. Rodney displays a suitable lack of excitement about doing his stand exercise in a new part of the pasture.