Thank you to the Wamble family and Courtney Huguley for their divine driving horses. (Alvin went on to win both 9-10 WT classes and the 10 & Under WT championship with his junior rider. What a star!)

What is it like to compete against one’s spouse?

One of the SSF entries was an adorable white pony named Miss Sugar Plum Fairy, barn name Sugar (Terry Young Photography, ACCHS, #53 & #91.) In warm-up, she made eyes at a fine looking pinto who was also waiting for the class. 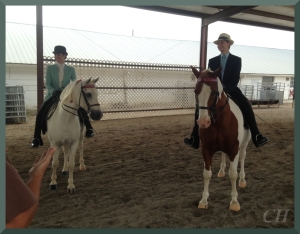 In warm-up, I offered what tips I had for driving saddle seat style. When the class was called, I was all lined up to storm in first. I had to stop for a tack adjustment. Once his tack was adjusted, Alvin was ready to GO. As a result, I ended up right behind Greg and Iggy. On the downside, it is silly to have a traffic jam with only two in the ring. On the upside, it gave me a target. When the extended trot came, I made sure to go fast enough that I passed Greg. Both ways. You want extended? I’ll give you extended. Alvin, being the consummate showman, was all in. Greg said he & Iggy felt hunted. Good. That was the plan.