By Virtual Brush Box on November 30, 2020 • ( Comments Off on Mood On Monday, Reconsidering The Public Hug, Repost )

Over on Whatever, John Scalzi considers personal boundaries in the future, “So: far fewer hugs in general, and in particular with people I don’t know well. While we’re at it, I’ll be fine with a lot fewer handshakes as well.” Whatever: The End of Casual Hugging(?)

Below, I have reposted my discussion of greeting etiquette that first ran in May of 2013 on Rodney’s Off Topic, a second, parallel blog that I had for a while because reasons.

This is one of the few from over there that did not get cross-posted or reposted here. Eventually, I gave it up and threw everything in the same pot. [New Project, Yay or Nay?]

Was I prescient? Or a case of be careful what you ask for? 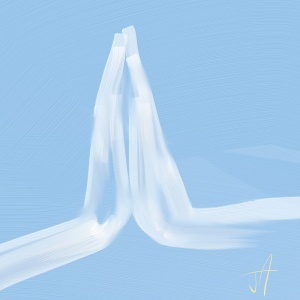 I wish I could make Añjali Mudrā my default social greeting. You may not know the term but you know the gesture: hands in front of the chest, fingers pointing upwards, palms together, slight nod with head and upper body. It can be performed silently or with the verbal greeting, “Namaste”:

The gesture Namaste represents the belief that there is a Divine spark within each of us that is located in the heart chakra.[8] The gesture is an acknowledgment of the soul in one by the soul in another. Wiki

The namaste ritual is respectful, non-invasive, self-protective, and centering. Other greetings, not so much.

Lets say I’m in a mixed group in an undefined setting. While the alpha males are exchanging testosterone, I spend far too many seconds thinking Should I? Shouldn’t I? If I offer to shake hands, am a being cordial? Or pushy? If I don’t, am I being considerate? Or caving in to the patriarchy? Then the moment has passed and instead of making a decision one way or the other, I have stood about looking gormless.

A handshake has the advantage of being one-handed. Hand to heart would be a non-invasive substitute for this. But then I’d look as if I was center stage at the Coliseum;

An in-house joke drawn on my farewell card by a colleague*.

Air Kisses
The gesture is so unutterably French that unless one is in France or in a French-influenced location, air kisses come off as studied, pretentious even. If you are in France, do you use the the provincial two kisses or the Parisian trois fois? Or is it the other way around? In college, we had our own version, but we were all single then. Moving on.

Americans lack the innate style to handle this gesture. We are an enthusiastic, earnest, ambitious people but suave – collectively – we ain’t. A fashion-forward Frenchwoman could pull this off even in reddest America, but then the French can pull off a whole host of behaviors that Americans should never attempt. Bless our hearts.

Air kisses can be done without contact but not without an invasion of personal space.

Hugs
Hugs should be saved as a special gesture. For instance, recognizing someone as a close friend or family member. Or to display an excess of emotion, e.g. I’ll hug everyone in sight after a horse show. In each case, a hug elevates the recipient above the normal recognition of simply sharing the same time-space coordinates.

I’ve been known to drop a spontaneous hug into a professional situation when our lives are diverging. For example, the last time I left Lexington, KY, and knew it would be a long time before I was back in a press tent.

Hugging risks entanglement. Leaning in to hug puts me off balance. If the other person moves away, I fall over. If the other person is of the energy-sucking variety, I can be pulled into the drama. A neutral gesture means I stay centered within my own space. While this contains an element of selfishness, I am of no use to you if I am flat on my butt. A firefighter who does not protect his or her safety is in no position to rescue anyone else.

In the case of the one armed bro-hug, I lack the requisite chromosome to understand the nuances. To me it says, “I love you, man – but without all that messy yin.” Also, it strikes me more as a hug of the moment than a permanent social expression.

In Sum
The palm-to-palm gesture says:
I see you.
I acknowledge your existence.
However,
I will not disrupt your personal space.
I do not require that you perform any action in return.

*”Dan”: If you’re out there and ever see this, up to what have you been? I’d love to credit your brilliant work, but don’t want to use your name without permission.