Awareness of the outside world. “That electric blue that all of us dream of pinning on our horses’ bridles.” Calling All Horse Girls: One In Six Hundred and Sixteen, by July Urschel. No, I’m chopping onions. Why do you ask?
~~~
Recent Additions. Thank you to Identify Your Breyer: for the model/mold data. Still have no plans for these, other than “Oooooh, pretty.” Bought back in December. I can’t blame cabin fever. 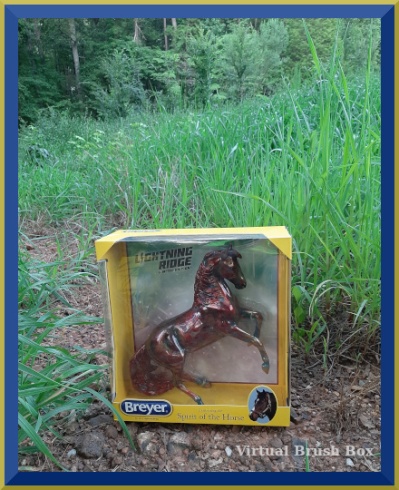 As I have done every year since 2015, I bought the MEPSA result book as inspiration for my model horse photo showing. I know the chances of me actually getting around to organizing a photo shoot and entering a contest are vanishingly small. If I wanted to, I would have done so by now. I like to think it’s a possibility. Allow me my fantasies.

Plus a handful of Stablemates Mystery Horse Surprise Blind Bags & Mini Whinnies Surprise Packs to relieve the ennui of errands.

Research Notes for Rest of the Herd
Model refers to the paint job; mold is the underlying body. AFAIK

Fire. The only one I have managed to name. Chinese Year of the Horse. Breyer model #1715, mold #717. “The Esprit mold was designed specifically for the 2010 World Equestrian Games (WEG). It was sculpted by Kathleen Moody.” Identify Your Breyer: Espirit. [Shopping: My First Model]

Illumination. Breyer model #1799, mold #1279. “Nokota was introduced in 2007. The mold name refers to a feral and semi-feral breed of horse native to the North Dakota badlands. It was sculpted by Kathleen Moody.” Identify Your Breyer: Nokota. [Low Key Photo Challenge: Toys]

Winter Wonderland – The 2017 Holiday Horse. Model #700120, mold #725. “The Totilas mold was introduced in 2013 and is a portrait model of Dutch Warmblood dressage superstar Totilas. The mold was sculpted by Brigitte Eberl.” Identify Your Breyer: Totilas. [Speaking of Shopping Sprees, My Latest Breyer Purchases]. Second photo from Breyer site.

Sam. Model #, mold #476. “The Cigar mold was introduced in 1998 and is a portrait model of 1995 Horse of the Year Thoroughbred racehorse Cigar. It was sculpted by Susan Carlton Sifton.” Identify Your Breyer: Cigar. [Foto Friday: A Suitable Subject]

Peppermint Kiss. Model #700118, mold #728. “The Gem Twist mold was introduced in 1993 and is a portrait model of Olympic and World Champion show jumper Gem Twist … The model was sculpted by Kathleen Moody. Identify Your Breyer: Gem Twist [Shopping Bonanza]