Note. This was originally scheduled for Monday, March 2, 2020, as a preshow post before the barrel race show report [The Meaning Behind Mondays]. We went. We barreled. We did not show. Therefore, no need for a show name [Not From Around These Parts]. I put post and name aside to be used later for a dressage show. Then we decided to put dressage on hold [Horse Show Cookies]. Then the world decided to put everything on hold. Posting now because who knows how I will feel about his name when horse shows are back on the agenda. Stay safe. Stay sane.
~~~
Introducing …

We needed a name because we went to a show. Report later this week. You aren’t going to believe what Rodney did.

Why Dr. Whooves? Because Rodney has the whole scarf thing going on.

Portrait by Martine Greenlee [Art Week, Day One, The Reveal]. 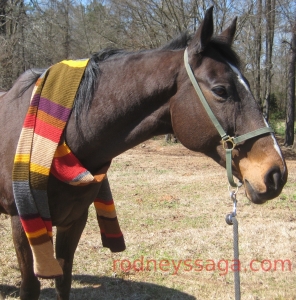 Dr. Whooves is a My Little Pony character based on the lead from the TV show Doctor Who [Latest Additions to the Blog Stable]. While the title of the Doctor is never abbreviated, the Time Turner’s title is.

Actually, the scarf is more 4th Doctor, while the Time Turner is new series, mostly #10. As with Macho’s
costume, “Dr. Whooves” is slightly easier to explain than “Trot Baker.”

The name Lord Chummingly Mountjoy III would be even harder to explain. What?

For your amusement, MLP references on Doctor Who from the Tardis Data Core, Toys from the real world, My Little Pony . Also, an artist’s rendering of #12 as a pony, and Peter Clopaldi. Neither of these are canon or fanon, as far as I can tell.

If none of this means anything to you, just smile at the geekery and carry on.