Kudos
First of all, a huge thank you to Craig Zernik of Four Corners Gallery. We spend an hour, at least, coming up with the Mad Horse in a Box framing concept. Mat or no mat? Brown frame? Oooh, how about Tardis blue? Is this a good blue? How about this one? And so on. Then, he did a lovely job building the frame. Plus taking the close-ups I forgot to take, keeping me posted, and generally providing all around outstanding service.

I really did take it directly to the gallery. 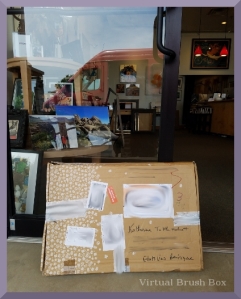 Realism
For those of you who haven’t seen Rodney IRL, she caught the look in his eye. This is clearly himself.

As for the scarf. Hung picture on wall. As I walked away, I swear I saw the thing move out of the corner of my eye. So, all that painstaking knitting with pastel pencils was worth it.

Nits
A few tiny, tiny corrections for the record.

Rodney is a TB but not an OTTB. No racetrack flashbacks for him.

Previous Horse had passed on when I started looking for his replacement. That added to the feeling of Clear the decks, Let’s do this thing, Let’s find that special horse.

As for the spirit behind the search, she was right on,

I sniffled when I read that.

Photo
Martine was also right about the photo.

It’s not a flattering angle … The head collar does nothing for his pretty face. [Part 1]

However, I never really looked at the technical aspects. I was too enchanted with the contents. Horsie! Scarf! Ears Up! Too late to change now, it has become an icon of the blog.

[Life On A LEGO Tile] 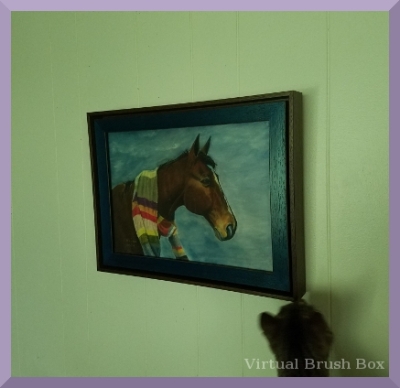 Thank you, my friend.