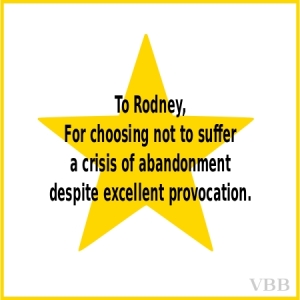 Every time we ship Milton off the property, Rodney gets a gold star. Granted, we are easy to score gold stars from. We give hand them out like elementary school teachers with fistfuls of sticker sheets. Still, Rodney deserves his.

As I said yesterday, the horses are cool with the three of us going over to Stepping Stone Farm.

Milton ships well and has learned to auto-load. That means we toss the leadrope over his neck, point him at the trailer. and he walks on by himself. I’ve said before, I may be a hot mess under saddle, but I know from ground manners.

Rodney is totally fine with Milton leaving, even when we are gone for days. He gets the run of the place, speaking metaphorically as the whole point is that he doesn’t gallop about. We leave the stall door tied open for the express purpose of letting him wander in and out, which he seems to enjoy. He gets a large hay snack and his toy/treat dispenser [Cookie Ball!]. His response? ‘Via con Dios. Don’t let the gate hit your fluffy gray tail on the way out. Now where is that cookie ball.’

As anyone with horses knows, this could so not be the case. Most horses don’t like to be alone. Easier to become cougar bait that way. Milton used to have trouble when I would take Rodney out of the field and around to the other side of the barn for the blacksmith. Milton could SEE Rodney, was five or ten feet away, and still got upset. He’s getting better, but still doesn’t let Rodney take a lap of the field without screaming &/or galloping over to find us. That is closer to normal.