First they added length, like little kitten-shaped Dachshunds. Then they grew legs. Now they are bulking up. From an aesthetic point of view, I’m a little concerned about their heads. They have adorable kitten-sized skulls, which don’t seem to be growing. Will we end up with adorable kitten-sized heads on cat bodies?

Still no names. Three-quarter tail thinks she (he?) might like to be called Princess, but isn’t sure. Long Tail & the Stubbies remain as before.

Lots of sleeping kitten photos.
1) They are fast when awake.
b) My house is enough of a hot mess that I don’t like having it show up in the background of photos.
3 or c) I’m trying to enjoy the moment rather than obsessing about catching the moment on film. So to speak.
Mostly, they are too fast for me.

Still haven’t see a pattern in who plays/sleeps with whom. Lots of two and three kitten piles. Not many 4 piles or 2+2 piles. Usually 3+1 or 2+1+1. If a kitten is off alone, it is often Long Tail. The male Stubby is the most likely to be meowing because he has lost everyone. 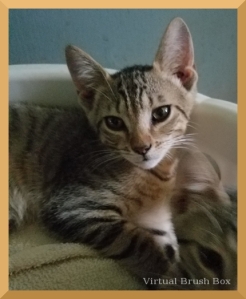 A friend was visiting when the pseudo-Siamese were young [Gratuitous Kittycake]. (That may have been the last time my house was in an acceptable condition for company. But I digress.) She said, “They look like popcorn.” These guys even more so. Apparently the accepted way to great one’s sibling is to leap high in the air with one’s front paws spread wide. Whaaa!

They are adapting to the dogs and other cats. Dogs and kittens ignore each other, by and large. The kittens are fascinated with the cats. The cats not so much. Much hissing and staring down from tall objects. The kittens are appropriately submissive to the cats. When reprimanded, they hunch down and back off. But they don’t back off far. I foresee bolder gestures of friendship in the offing.

The cats have a point. I was doing something on a table. All four kittens came to check me out. That’s a lot of eyes suddenly staring at you.

They are also fascinated with the bathroom, particularly the bathtub. The surest way to get all four together is to take a seat on the throne. They all come running in to bounce in and out of the tub, slid off the side, and play ruffle games with the shower curtain.

They are not jumping yet, but are climbing like squirrels. They’ve conquered great heights by climbing everything they can. 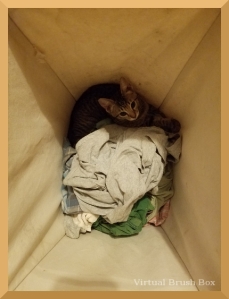 Note: As before, photos are in chronological order, not necessarily bearing any relation to the surrounding text. The border is taken from the tummy color in the four-kitten photo, not the color of the laundry hamper. I felt that needed to be said.