When the Stirrup Swings

Still no saddle seat. Reminiscing instead.
~~~ 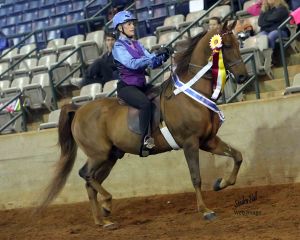 It was 2014. I was riding in my second National Academy finals. I had moved up to walk-trot-canter, which wasn’t as much of a big deal for me as it is for the average Academy student, I suspect.

I don’t remember which class it was. There wasn’t the feeling of infinte possibility, so not the first day. I wasn’t overcome with despair when it happened, so not the Eq Final pictured above. Probably one of the Saturday classes. [Show Report, list of posts]

I do remember exactly were we were in the arena. Right at the end of the ring, going past the in/out gate in the first direction. Details like that stay in your brain.

We had cantered. We were walking. I felt my left – i.e. inside – stirrup slip off my foot.

I have a good leg position, which translates to my feet staying were they are supposed to be. I rarely lose my stirrups. However, when I do, they stay gone. Earlier that year, I had manged to lose both at a fun show. [Show Report]. This was Nationals. I couldn’t exactly pull up and fish around for a misplaced bit of metal.

So there I was, foot hanging in the breeze. We walked. They called for the reverse. ‘Okay,’ I think, ‘At least the judges won’t be able to see that I’ve lost my stirrup.’ Nationals may have three judges, but they are all in the middle of the ring. Sins committed on the outside are not visible.

I was on Sam, so I wasn’t worried about staying on for the trot or canter. I was worried about keeping myself from looking lopsided when posting with one stirrup. (One is actually harder than none. Try it sometime.)

As we swung around, the stirrup slipped neatly back on my foot. Off we went.

That was four years ago. I can still feel the stirrup sliding off and sliding back on.

Thank you for reading.
Katherine Walcott