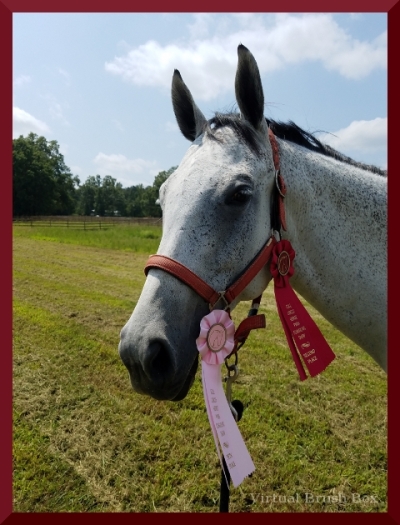 Highest score: 7, halt
Lowest score: 5.0, multiple movements
Most helpful comment: “Elastic” She was talking about contact, but it works for the whole horse. A better way to think about movement than, Come on, Milton! Move your bloomin’ arse!

Results will eventually be available at FCHP > Shows

How It Rode
Warm-up 1
Compared to other outings, say the trail ride [Canadian Horse, detour], Milton was a star from the start. I got on. I walked around. I went in the warm-up ring. We trotted. No need for pony rides or remedial haltering.

I’d say 90% relaxed, 10% cranked. He looked around. He had reservations. When we trotted, he pulled a little, which is unusual for him. The possibility of a hissy fit was not on the table, but he had it in his back pocket in case he needed it.

We alternated between the open grassy space in front of the ring and the warm-up, see photo below. He liked being inside of the fence, but he thought the footing was weird. Not bad, not good, just weird. He had one small objection to an oncoming horse. After that, I stayed out of warm-up when it was a madhouse, but made a point of going in when the traffic was moderate &/or walking. It’s a balance between not upsetting the canoe and giving the canoe a chance to acclimate.

Test 1
Speaking of acclimating, I had planned to walk past the judge’s tent, but the bell rang before we made around the outside of the ring. What’s the deal, dude? This is a schooling show. Despite that, Milton was fine with the tent & the people sitting in it. He was fine with the photographer. What did he spook at? Husband Greg standing next to the ring reading the test. Silly git. We had specifically chosen to have Greg read so that he would have an excuse to stand near the ring and that Milton would hear his voice.

The test is so short that all we really had time for was Milton meet dressage ring. Dressage ring, meet Milton. Halt. Salute. Done.

Milton was enormously proud of himself for surviving the ordeal.

Warm-up 2
As soon as I got back on, I could feel the difference. Milton was over it. Whatever. I’m an old hand at dressage now. He left the possibility of a hissy fit back in the trailer. Too much work to carry around.

The biggest problem in warm-up was keeping him from being distracted by a gray pony mare. She was cute. He has good taste.

Test 2
In the ring, he did as well as when we practiced the tests. You can’t ask for better than that. No contact. No pace. But we don’t have those at home yet either.

Since the reader is near the ring, he was able to slip Milton a peppermint as we came out at A. Milton quite liked that part.

How It Looked
First Test

Warming up before the test. Ground crew did not see what I felt.

Alright, we were slow. But he was quiet and pleasant, so I’m still happy with it. Video courtesy of Sharon Melnick. 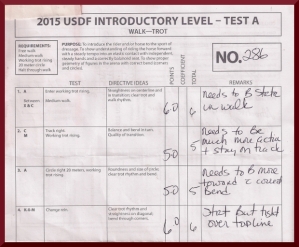 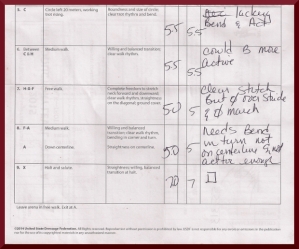 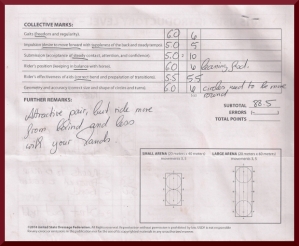 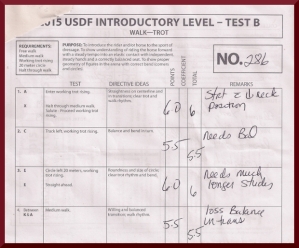 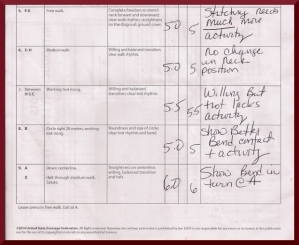 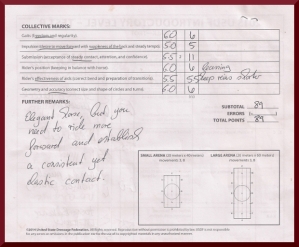 Update, Show Posts
Into Each Life A Little Dressage Must Fall
Dressage Versus Saddle Seat, The Night Before
Braid Shade
So It Begins, Show Photos, Dressage at Full Circle Horse Park, Summer 2018