In Which I Consider How Much Schooling Is Enough 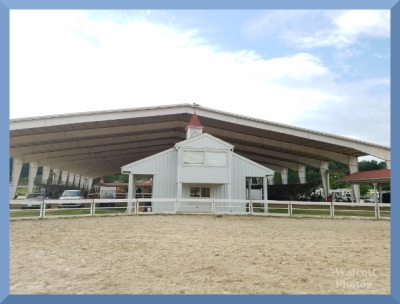 “Puck … was a right stroppy pig at his only outing in 2017, so he’s going on lots of adventures this year as a non-compete.”
Lauren Sprieser
COTH: Reintroductions

I’m not sure what a “stroppy pig” is, but I’m pretty sure Milton was one at his first driving show [not a post]. Since then, we have taken him as a spectator to two Saddlebred shows [MSSP, NEGA]. Horse and rider have both benefited from the experience of seeing new things and from the experience of living through seeing new things. Another spectator show is coming up. Should we go? Or are we ready to show?

When are you ready? Do you have a choice? If you have a target competition, the amount of time to practice is dictated by the calendar. Reagan better be ready when the gate swings open in Lexington [Road to the World Cup]. For actors in a production, the number of rehearsal is limited by the number of days. They better be ready when the curtain goes up on opening night.

When are you ready? Have you done enough? We thought we had done enough last time. We were wrong. Undoubtedly, we would all benefit from more exposure. OTOH, we could make a career out of being a non-compete. The goal is to become a compete. You can assemble all the rockets you want in computer simulations. At some point you have to get out the sheet metal and rivets to see if your idea can fly.

When are you ready? How many options do you have? When I lived in the Mid-Atlantic region, the show calendar was a buffet. Blow a show? That sucks. Go to the next one. In the Southeast, shows are multi-day efforts that require vacation days from work, long drives, and room/board for horse & human. This is particularly true for driving. There just aren’t that many chances. You don’t want to blow one. If you are run a 5K road race, there’s probably another one next weekend. If you want to finish an Ironman, there probably isn’t. “There are over three dozen Ironman Triathlon races throughout the world that enable qualification for the Ironman World Championships” Wiki: Ironman Triathlon

When are you ready? Is anyone else going? Puck can go along while his barn buddies compete. Milton is the reason we go, not an add-on. If you sell your paintings, it’s easy to toss one more in the van headed to the Art Fair.

When are you ready? Does anyone else care? A professional horse trainer has all the regular pressures of horse training, plus bill-paying owners to keep happy. As amateurs, Husband and I can please ourselves. A sight-seeing trip for yourself is easy enough to move around, reschedule, or cancel. There is less flexibility when planning the annual sight-seeing trip for the garden club, church group, or Boy Scout Troop.

Update: I occurs to me that I might have been unclear. There are two groups of shows:

1) ASB shows that we go to with Stepping Stone. Milton goes as a spectator. There probably are a few classes we could wedge him into, but he’s not the right kind of horse. It’s an expensive way to come in last. Plus, group classes on the flat are not his destiny.

We are using the first group to get ready for the second group. Or maybe you got that.