Another guest at APF was Dr. Osborn, a balloon artist who ran around the convention making astounding sculptures on request, everything from a Ghostbusters’s proton pack to a T. Rex skeleton. For Rodney’s Saga, he made a horse.

He told me it was free but I had to clean up after it. Air bubbles? It’s yellow to match my LEGO crown. 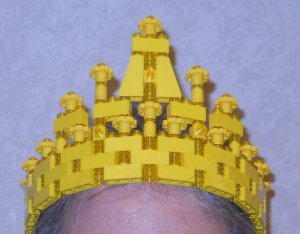 Yes, I spent the Festival as a LEGO princess*. People took my picture! At Cons, asking to take a picture is a standard costume compliment. I made sure to credit the LEGO Queen for the crown’s construction, but was still chuffed to be asked to model.

(*What part of life-long geek didn’t you understand?)

What is the coolest, non-standard art form you have ever seen?