Awareness of the outside world. Vaccine today! Report Sunday.
~~~ 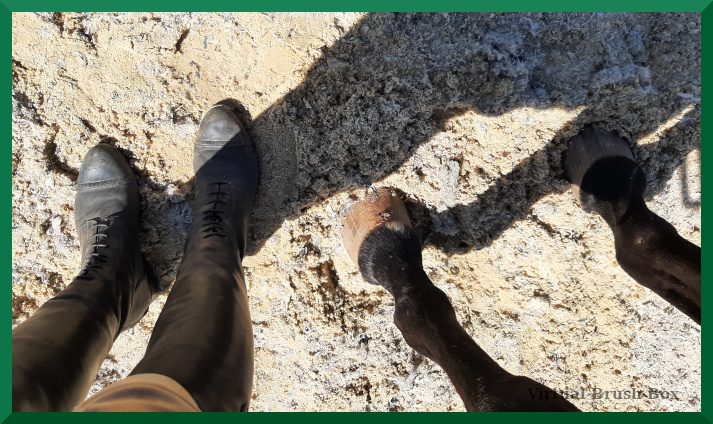 Previous horse was rigid about his trailer protocol. He came off. He had a bite of hay. He had a nap. Then and only then was one allowed to commence.

Knowing this, I have worked fairly hard to NOT establish this sort of precedent with the current occupants of the barn. As a result, we can unload and leave them to eat hay, or get right to work.

Habits get established when one isn’t looking.

At home, we tack up and get on. Easy enough. Home isn’t a weird place that needs to be examined.

At Stepping Stone Farm, we tack up and get on. However, one of the main reasons for going to SSF is using the round pen for liberty work. So, when I tack up, Rodney has already run about for a while. [Recap]

Last weekend, we arrived at Full Circle Horse Park. We brushed. We tacked up. I got on.

Milton was having a lunge warm up. I figured Rodney could stand and watch. Statue is one of his go-to moves.

He would not stand still. He wasn’t bad. He’d listen. He’d halt. But he couldn’t stick the landing. He had ants in his pants. Making him stand would have involved constant nagging.

I had forgotten that at FCHP, I have been taking him down to the dressage arena to walk through the test once on foot. This gives him a chance to look at that and that and that over there. He doesn’t need lunging to warm up his muscles. He needs time to let his brain settle. Standing around or walking in-hand serves the purpose. Easier to do that without a rider, at least, easier on the rider.

I got off. We went down to the arena. We walked the test. I got on. His statue gear was back in place.

6 thoughts on “Protocol Will Be Respected”