The world is vast & weird.

Awareness of the outside world. Operating costs can be hard to fund. Donors want their name on a building. People want to be associated with a particular project. It’s not sexy to pay salaries and buy tiger feed.
~~~ 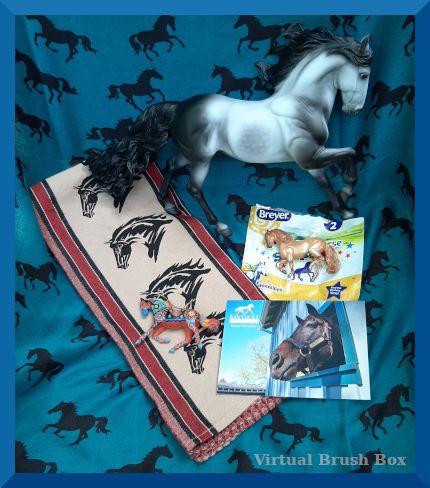 In my Virtual BreyerFest recap, I mentioned social media chat. One commenter noted how much money Kentucky Horse Park was losing from not having BreyerFest on the premises. [I Came, I Saw, I Sat On The Couch]

Duh. Obvious now that it was pointed out to me.

I scampered over to spend money. I thought about buying a model to donate. Are organizations taking stuff these days? I wouldn’t. Instead, I filled up my cart with pretty things.

Scarf Teal Tassel Horse. To be used as a tablecloth at horse shows. Remember those?

Towel Horse Head Red. More horse show tableware. What can I say, I was feeling optimistic.

Ornament Eye Dazzler. I have a soft spot for civic street art projects. This is from The Trail of Painted Ponies.

Mystery Horse Surprise. Gift for getting my cart over a certain amount. Challenge accepted.

While I was flinging dollar bills about, I joined the Man O’ War Society. I have never lived in Kentucky. Yet, KHP has been a big part of my life. One week each year for a while there. It’s been my competition goal for more years than I want to count. May KHP continue for many more.

Update: Ordered two towels. Only one in box. Sent email. KHP took me at my word. Sent a second. Excellent customer service. If you think about it, they had no way of knowing whether or not I was trying to wheedle them out of an extra towel. I guess a) Who does that? Who would go to that much work for a hand towel? & b) Better to send an extra towel and lose money if I was lying than risk alienating a customer in the event that I was telling the truth?