The world is vast & weird. 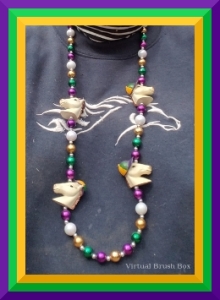 Not caught from an actual Mardi Gras parade. I have never been to one. These are from a work convention in New Orleans that used Mardi Gras as a theme.

Let the good times roll. At least until midnight tonight.

Thought For Tomorrow.
Lest we forget the reason for Mardi Gras in the first place. The party ends at 12 sharp with Ash Wednesday and the beginning of Lent.

Mardi Gras seems to be morphing its way toward a secular holiday, along the lines of celebrating Halloween (All Hallow’s Eve) without celebrating All Saint’s Day the next day. Until then, remember:

You came from stardust.
To stardust you shall return.

My take on the Imposition of Ashes.