After the success with Rodney’s padding [Recent], we decided to see if anything of that sort would help Milton. He’s always been girthy and hates to be touched. Perhaps he would like to be insulated from the slings and arrows of life.

We messed around with pads and girth covers, with the saddle and with the driving harness. I’ve lost track of the number of pads we have ordered, tried on, cut up, and tried on again. Some were learning experiences [Tiny Victories]. Hop, hop, hop.

Current configuration. For long-lining, Milton wears a jointed wither pad and a sheepskin girth fuzzy. The wither pad is a second purchase of the one we cut up for Rodney. The driving saddle gets the fancy fuzzy because the girth is shorter. For riding, he wears a thick felt pad and a Muppet-fleece girth fuzzy.

Yes, we are enveloping our horse in bubble wrap. 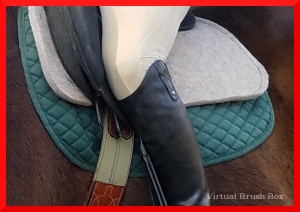 In the photo, Rodney demos Milton’s felt saddle pad. Rodney’s padding lead us to try the concept of padding with Milton. The success of the big felt pad on Milton lead us to circle back and try it on Rodney. The black line is from where we trimmed the pad. Turns out Milton does not like an extra long pad touching him on the back. No sir, he does not like that at all.

How will we show in all of this? I have no idea. First step, ride the horse. Second step, practice at schooling shows where one can get away with non-standard gear [1000 Words]. Third step, figure out a way to make it all rule-compliant and stylish [Rodney’s Bit]. Fourth step, take the show on the road. Many steps between here and there.