Overcoming Obstacles in Our Way 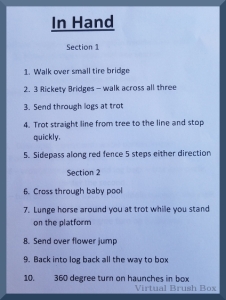 I signed up early, so I ended up being first on the list. I thought about asking to see someone else go. However, no one else was immediately available. Oh well. I figured our problems would be those of execution rather than of understanding. And so it proved.

1. Walk over small tire bridge, 1+1+.5=3 1.2
That was a narrow bridge for a big horse. I tried it a few times longwise. No, Ma’am. He’d walk up to it and look at it, but wouldn’t step on it. After a few tries, I asked him to go over it crosswise to give him the idea. He stepped on it but tripped/slid. Okay, done with that.

4. Trot straight line from tree to the line and stop quickly, 1+3+.5= 4 1/2
The score sheet says we left points on the table. That would be on me. He did everything the way I asked him to.

5. Sidepass along red fence 5 steps either direction, 1+3.5+1=5.5
I was (mildly) worried about this one because sidepassing with a fence to block forward progress has caused him to feel catastrophic in the past. No problem. Moved right over 5 steps. And then had to take a good look at the – stationary – golfcart/atv being used by the scorers.

6. Cross through baby pool, 1+0+0=1
Wasn’t gonna happen. He’s done baby pool at home. This one was narrower, less substantial, and it’s been a while. I even walked through the water in my boots to see if he would follow me.

About this time, I heard the judge call, “Next!” Or though I did. It may have been someone outside of the ring talking about something unrelated, or the scorer calling out my time. Whatever. Time to move on.

8. Send over flower jump. 0.5+5+1= 6 1/2
If anything spoke to his heritage, it was this. He thought the flowers sticking up were weird, but hopped right over.

9. Back into log all the way to the box, 1.5+3+1.5= 6
I conflated this with the novice course and did a mushy turn on the forehand to get into the backup area. Then, I had trouble arranging my knitting. Couldn’t organize horse, hold my leadrope, and aim the hooves all at the same time.

10. 360 degree turn on haunches in box, 1+1+1.5=3 1/2
Wasn’t gonna happen. We’ve worked on turn on the forehand, but not turn on the haunches. I made a generalized circle and called it a day. Is it possible to request an over-sized box if one is trying to rotate an over-sized horse? Asking for a friend.

Overall. He was a star. Anything that involved listening to me he nailed. He refused most of the super strange parts, but at least he went up and checked them out. He didn’t throw a fit. He just said, ‘Nope. Not today.’

Warm-up, No Class
The plan was to do the novice class if he settled. When I got on at the trailer area, I felt that horse brain was not sufficiently screwed into socket. So, I got off and walked down the short stretch of road to the showing area.

We walked in-hand for a while. Then, I had to figure out how to haul my sorry carcass on without a mounting block. I do horrible leg-ups. I finally used a tippy, black, plastic barrel that he didn’t like the looks of. That should have been an obstacle right there.

More walking. He was moderately relaxed but he wouldn’t hold a stand. He’s been standing magnificently lately. The fact that he wouldn’t stand still told me that he was still anxious. He was starting to wind down just as the novice class was ending. I would have done the class if he had settled faster or class had less trotting.

On way back, we walked in-hand around the goat obstacle – with live goats – for the trail course. He looked, but went right around. As I’ve said, weirdly brave.

Schooling Novice
During the lunch break, the course was open for schooling.

0. Checkerboard plank.
4’x4′ painted wooden plank. Balked at. Got a lead over from his ground crew. Oh, okay, that’s what you want. Marched back & forth.

1. Small tire bridge – walk over, halt in middle 5 seconds
Tried crosswise again. Caught a hind foot on it. Not our obstacle.

2. Rickety Bridge – cross over one section
Walked over one short leg, then back & forth over the longer middle. No lead.

4. Cow – trot one roll back
Walked past. Ho hum. Rolled back at a walk with rider keeping an eye on cow as if cutting it. As we turned around, Rodney finally got a look at the cow cut-out propped on the fence. He gave it the stink eye and backed off a few steps. The closest he got to spooking all day.

6. Baby pool cross with water bottles inside
Nope. Didn’t even walk up to it.

7. Platform – walk on, halt five seconds, walk off
Stared at. Saw ground crew on it. Walked back and forth over. Tried to stop him on top, but my timing was off. He got confused. Came back to it unmounted. You have to ask for the stop right as they are stepping up with the hind legs. Did it perfectly, see photo.

8. Figure 8 – around minion jump and log back – trot one circle, canter the second
Walked.

9. Log Back – Turn on forehand, back in to middle opening and walk out the other side
We did a few single steps of back. Then he put it in reverse and backed up till we ran out of room.

Overall. He did exactly as well as I expected. He can do all of this at a walk. As always, the part that he has the most trouble with is simply being ridden.

Other Notes
I was surprised at the amount of helmet wearing. Out of two dozen(?) riders, all but two had helmets. That’s over 90%. One woman also had on an air vest.

I was also surprised that there was three other riders in English tack, including a full-on DQ complete with white schooling boots and blingy browband.

At The End of the Day
I wouldn’t be me if I didn’t harbor fantasies of belt buckles and year-end awards. You know, if I learn what they want for presentation, I can raise my … no. I am trying to squash my competitive side. The goal is to do something different and fun. To do something Rodney is good at so that he can have successes. For that, the show went brilliantly.

I don’t rule out a few lessons over the winter in order to practice the obstacles. 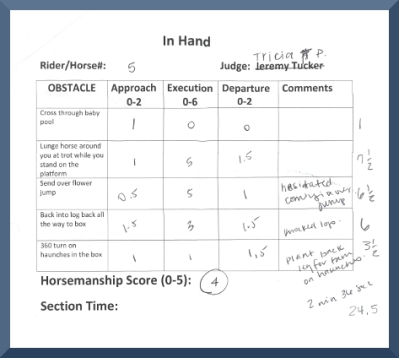