Day 3, continued
Adult WT Equitation National Finals – 2nd
When we discussed my previous class, I tried to accrue what credit I could, “At least I diamonded.” Well yes, but apparently I leaned forward while doing so. Note to self, do not pitch forward into turns. Stay back. Not behind the motion but not flopping over the neck either. I did this thing.

A young horse is a more difficult equitation mount than a veteran. Sam or Alvin or Willie are so steady that I can leave them to their jobs while I flounce about on top. Trump, being young, is less consistent in his motion. As a result, I tend to luff like a badly-managed sail. When I asked what to do when I threatened to lose my balance, I was told to dig my knees into the saddle. When done right, the result is not stiffness. Knees-in becomes a short-hand for getting the butt properly balanced and using the upper leg. As I warmed-up for the second class, I realized that I had indeed been riding correctly. There was a small muscle in my right, inner thigh that was most displeased with this fact. A difficult area of the body to massage while in a warm-up arena. I told the muscle to get over itself and dug in. I would be quite lame by the end of the day.

As before, I rode with as much brio as I could muster and diamonded furiously. I recall locking onto one of the signs on the wall at the top of the ring and aiming for it as if I was a heat-seeking missile. Plus, I sat up and pushed Trump around the turns. I was quite chuffed about my ride.

I did make mistakes. I got caught behind the same slow horse twice. My bad. I should have seen the problem ahead of time and made a better job of going around. As it was, the speed differential was too great for me to pull back and go around. Nor did I quite have room to pass her on the rail. We sort of waddled along behind and to the outside while I tried to keep Trump from breaking down to a walk. We did miss her on the third go.

There is a proper procedure for trotting to the line-up [Ringmanship]. I am supposed to keep in the direction I am going, circle around, and pull in as close to the ringmaster as possible. It quickly becomes a poly-variable equation calculating my speed and position and the location of the ringmaster, to be solved for the intersection of the above while avoiding the center ring island and giving the judge a final look at my elegant self. I get it right about 50% of the time. Other times. I wander around the arena, thinking ‘Oh shit, how do I get over there?’ or, as in this class, ‘Holy cow, what piece of thin air did that oncoming horse and rider just appear out of?’

When my instructor came in to be my header in the lineup, I was expecting smiles and balloons. I did not get them. She was not optimistic. I had spent too much time covered up and hadn’t been seen. At least I sat up? Yes, but I was still waving my body parts about like an overly-exuberant orchestra conductor. Sadness.

We have not had time to debrief the show, but I gather that my instructor was surprised by the result. I dunno why. I simply took what she told me to do and sold it. OTOH, this is not the first time I have startled a riding teacher by pulling a rabbit out of a show hat. I had a plan. I executed the plan. It could have gone either way, but it went my way. Result, I look like a hero. Never underestimate the ability of an Ivy League liberal arts major to assess a situation and then layer on the bullshit.

I have now shown Trump at two big shows [Report]. Both times, we have been awarded a neck ribbon and the opportunity to ride a victory pass. What a horse.

I did not win a class. 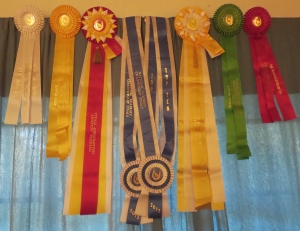 My Photos
Not many from the show. None with my camera. A few with the cell phone for Tweets, see sidebar or recap in Saturday’s upcoming post. The Tweet project [Toy] was partly responsible for the lack of camera photos, but mainly I was in princess mode entire time.

At most shows, I ride in one session – usually Saturday afternoon – and then mooch about trying to be helpful for whatever of the show I can stay to watch – usually Friday and Saturday evenings. These are the times I take pictures. Once the make-up goes on and the hair-spray is applied, I’m thinking about my ride, not photos. So, all sessions, no photos. Plus, it’s hard to handle a camera when one’s gloves are taped to one’s wrists. Seriously. It smooths out the line and prevents gaps.

Photos by Sandra Hall
National Academy Championship Horse Show. Chestnut horse, light blue vest, only helmet.
Friday Morning > 014 – WT Pleasure Adult
Friday Evening > 021 – WT Equit Adult
Saturday Morning > 039 – WT Equit Adult Champ
Saturday Evening > 053 – WT Pleasure Adult Champ (last class of the flippin’ day …
Sunday Morning > 054 – Adult WT Pleasure NF (… and the first class the next morning!)
& 062 – Adult WT Equit NF. I ordered NAF13-062-029. I usually wait for advice on which one looks best for horse & rider. This time, I wanted the victory pass, complete with ribbon blowing in the breeze. In the pic, Trump is pulling a trifle. My instructor is at the end of the ring tossing dirt to attract his ears. Trump is making a beeline for her. I am letting him rock & roll. I seem to have trouble keeping the lid on during victory passes. The following shot, NAF13-062-030, is a close up of me. It is not as good of the horse, so I did not order it. However, take a look if you want to see what it feels like to achieve a year-long goal.

And that, Ladies and Gentlemen, was my show weekend in Murfreesboro, TN. Next time, we canter. On purpose.