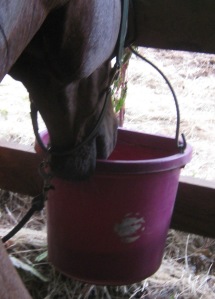 This is why we do not need a true cribber in the barn [HHPR#4]. For now, Rodney only gnaws lightly from time to time. Generally when we are around & he wants us to be doing something other, e.g. feeding him, fussing with him. leaving him alone, and so on.

The first horse I leased was a cribber, as was a fancy show horse who slummed at my boarding barn for a while, & a friend’s wonderful Quarter Horse lived to 33 with a cribbing strap around his neck. Because of these horses, I hadn’t formed a general injunction against cribbers, only a specific one because of Rodney. However, from the comments [HHPR#5], sounds as if I backed into the right decision.

Any proto-vices at your barn? (Not a full pack-a-day habit, just bumming the occasional smoke.)