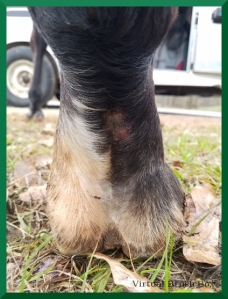 How did Rodney get what looks to be an overreach injury on a rear fetlock?

Turns out it has to do with the way he stands on the trailer. We have a slantload (prefer straightloads, small rant [not back]). Previous Horse used to park himself in the angle of the wall and the swinging gate. He’d brace himself there and go to sleep. Milton travels in a similar position. You can see the gray stripe across his butt when he gets off the trailer.

Rodney has worked out a different solution. Possibly because he’s four inches taller than Previous Horse and two inches taller than Milton and his butt doesn’t wedge in as well. Instead, he rests his left thigh against the swinging gate and braces his right hind foot against the side wall of the trailer. This drives the bell boot up into his fetlock. Oh well, at least he’s found a way to travel that makes him happy.

First remedy, lower the shipping boot to cover the foot and ship without a right hind bell boot. We’ll see how that goes. Shipping without bell boots was what they made us do back in the day. Or at least be able to demo it, eventhough we all shipped with bells.

I tried to get a photo showing how he stands on the trailer. He informed me that he was home, he had worked hard, and it was time for him to get out of the box. He had a point.