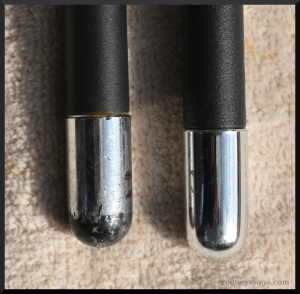 Lost at show (I always bring two). Replaced. Amazed to see how worn the old one had gotten.

I’m not beating horses with them, I promise. The whip is used lightly on the horse’s shoulder to indicate the canter depart: tip (the head) & tap (the shoulder). Although, I am more likely to use outside rein-outside leg as canter aids. I tend toward leg before hand.

Speaking of outside rein and not being in hunterland, for years I was told never to use the jumping bat/dressage whip on the shoulder. Always behind the saddle. The idea was to motivate the horse forward. One of so many reasons I am not in Kansas anymore.